The back side of every trading card across all series follows the same general format, which is explained below. 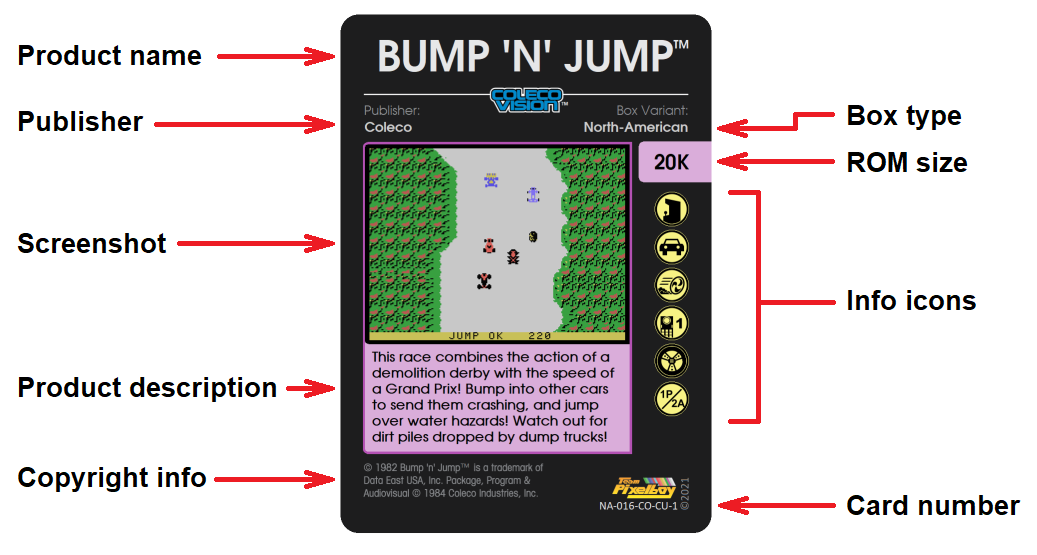 
The publisher of the game, or manufacturer of the hardware.


The box type is usually indicative of the territory where the game or hardware was released.

For the European series, I'm using the classification established by colecoboxart.com (CBS1, CBS2, CBS3, and CBS4 for Australia) for the CBS/Coleco releases. The European series also includes games that were released in Taiwan, and their box type is "Asian".


The number of kilobytes of the main ROM chip(s) inside the cartridge.


The screenshot demonstrates what the actual game looks like on the TV screen. When there are multiple box variants for a game, each card features a different screenshot, for variety.

For hardware cards, a picture of the hardware is displayed instead of a screenshot.


Each series of trading cards comes with a group of info cards that describe the meaning of the icons displayed along the right edge of the card. The contents of these info cards is found below:


This part of the card provides a short description of the game or hardware product. The background color is indicative of the region or homebrew publisher to which the card is associated:


Trademarks and copyright notices are displayed at the bottom of the card. When the box image on the front side of the card is an alternate homebrew box, the name of the homebrew box's creator is also mentioned here. Sometimes, minor trivia information is also present, when applicable.


The card ID number at the bottom right corner of the card, just under the Team Pixelboy logo, follows a special encoding system that allows new cards to be added to a deck without breaking any number sequencing.

Numbers 1 to 143 are used for legacy commercial games, and the numbering follows the alphabetical order of game titles. Game numbers in this range are used across all regions, so for example, "051" will correspond to Gorf in both North-American and European card series. The game numbers used for legacy games and prototypes can also be used by homebrew re-releases, if there are no significant alterations to the game's software (otherwise a new game number is assigned in the homebrew numbering range).

Numbers 144 to 199 are used for discovered prototypes, for which one or more homebrew boxes were created by ColecoVision fans. The games in this range are ordered mostly in alphabetical order, but any additional prototypes will be added at the end of this range, taking the first available unused number regardless if it breaks the alphabetical order of game titles.

Numbers 200 and above are used for homebrew ColecoVision games. The sequence of numbers is separated by year: For each year, the games released that year are placed in alphabetical order and numbered in that sequence.

This is usually "1", but there are some game boxes that come in two versions, such as Mr Do! that has two versions of the arcade cabinet box (one with the cabinet facing left and the other facing right) and that's where the box revision number is useful. Some homebrews come in similar yet distinct boxes too, such as CollectorVision's Mario Bros.


For the hardware cards, the numbering structure is slightly different:

The "hardware number" combines the hardware product with its manufacturer.