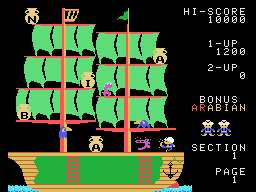 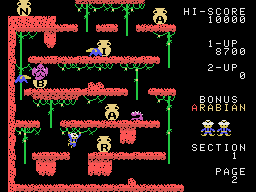 An arabian tale straight out of the arcades!

After a long voyage overseas, a young Arabian prince returns to his homeland to discover that his princess bride has been captured and locked away in a tower. In each screen, the prince must fight off hordes of monster birds, purple slimes and evil genies as he collects jugs to spell A-R-A-B-I-A-N, which allows him to go to the next screen, and ultimately rescue his princess. Master all four screens and try to beat your high score. 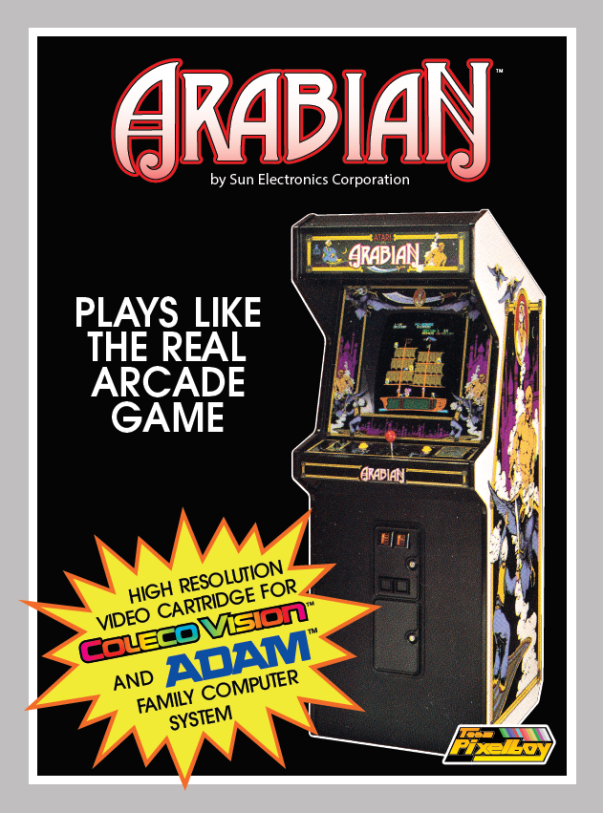 During the summer of 2019, Mystery Man and myself had a casual conversation about my upcoming retirement from the ColecoVision homebrew scene. He told me that he was sad to see me go, and that given the chance, he would have been willing to do one or two more games for Team Pixelboy.

At the time of that conversation, the templates for the final batch of boxes had not been sent to the printer company yet, so just for kicks, I tried to see if I could squeeze another box template into that last batch, for a game that would be released in the later part of 2020. There were several factors to consider, one of which was that I needed to get the boxes printed in all deliberate speed and I couldn't wait for an artist to do the box art from scratch for an additional game. The artwork had to be readily available, either from online sources or from some promotional poster or flyer. Another factor was the scope of the game itself, which I preferred to see fit within 32K of ROM space.

So after considering my options, I settled on an old arcade favorite of mine, namely Arabian, which had only been ported to the Famicom (and that version wasn't really a faithful port of the arcade game). I figured if a game like Roc 'n Rope could fit into a 24K ColecoVision cartridge, a similar game like Arabian could easely fit in 32K. I submitted the idea to Mystery Man, and he immediately agreed to code the game for Team Pixelboy. There was no interesting artwork available for Arabian, but there was a flyer with a good picture of the arcade cabinet, so I crafted the box template to copy Coleco's classic American box style. I figured it would be fun to have at least one Coleco-style box among my Team Pixelboy releases. :-)

At the software level, Mystery Man studied the ROM set of the original arcade game, acquired an understanding of enemy behaviors and other important software elements, and replicated the arcade game as closely as possible, within the technical limits of the ColecoVision, without using the SGM (so the game will work using only 1K of RAM). One other interesting aspect about this project is that Arabian will have a "Coleco feel" to it, by sharing the same skill-select screen that Coleco's arcade conversions had.